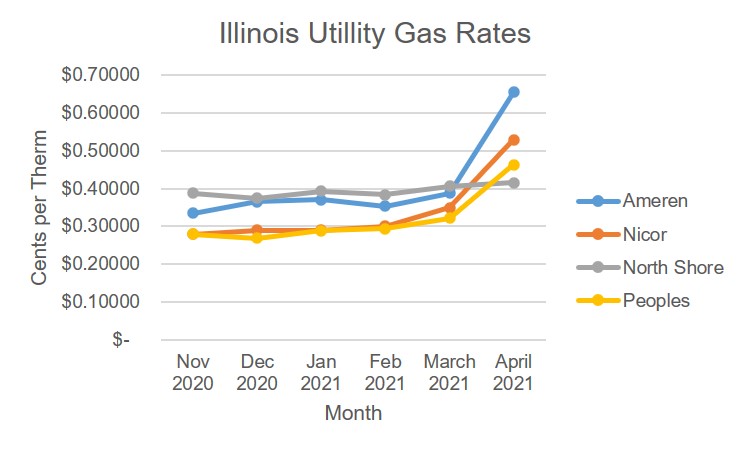 The Impacts of February’s Colder Than Normal Temperatures

The winter of 2020/2021 will be remembered for two sets of extremes.
• January was tied for the 9th warmest January in 127 years
• While February was the 19th coldest in 127 years and the coldest February since 1989.
It is certain that February 2021 will make the record books and the lingering effects will be felt for months to come, especially in the energy markets.
February’s colder than normal temperatures drove up natural gas usage for heating purposes and for electric generation. While demand was going up, production fell due to gas wells either freezing up or the transportation of gas being limited due to pipeline constraints or governmental intervention preventing gas from flowing out of certain states. The combination of increased demand and decreased availability drove spot prices for gas and the hourly cost of electricity much higher than normal. For several days in February natural gas traded as high as $129 per dekatherm at Chicago city-gate. Prior to mid-February natural gas was trading between $2.50 and $3.50 per dekatherm in the Chicago City-gate spot market. The Ameren market experienced the same price volatility during February.

Real time energy rates in certain Illinois zones averaged $39.89 per MWh for February up over 70% from January. For the period of February 15th through the 18th the averaged was $94.02 per MWh.
Depending on who you are buying your natural gas and electricity from will determine if you will see the effects of February on your future invoices. If you are buying your gas and electricity from a supplier on a fixed price contract that guarantees you pay the same rate regardless of how much you consume (full requirements contract) you shouldn’t be impacted by February’s price spikes. This could change if your supplier declares force majeure and tries to pass some of the cost on to you.

Buying Natural Gas from a Supplier
• Variable rate not tied to an index
Most variable rate natural gas contracts are tied to either the NYMEX settle or Natural Gas Intelligence settle with the supplier’s adder/margin. Some variable contracts aren’t tied to an index and are based on the cost the supplier pays for the gas consumed and some contracts move to a rate like this when a fixed price term ends and rolls to a month-to-month term. If you are on this type of rate you can probably expect to see a significant increase as suppliers likely under estimated usage combined with the effects of an extremely high-priced spot market during the month of February
• Stated Quantity Contract (non-full requirements)
There are generally two types of contracts: 1) a full requirements contract whereby you pay the same rate for all the gas you consume; and, 2) a stated quantity contract where the monthly contract quantities are listed in the contract and any variance above or below the contract quantity is billed to you or bought back from you at a different rate. Normally the rate is based on the supplier’s actual cost for the month plus that supplier’s adder. If you have this type of contract it is fair to say you likely consumed more than your contract quantity for February. This overage will be billed at the supplier’s average cost of gas acquired during the month which as stated above may have been over $120 per dekatherm at times during February.
Buying Natural Gas from a Utility
The utilities acquire gas at different time periods to cover the requirements of customers buying from them. Utilities buy gas during the non-heating months and inject it into storage for withdrawal during the heating season. They buy gas before the start of the month based on projected monthly usage less anticipated storage withdrawals and buy gas during the month based on changes in expected usage. Since the utilities were likely buying some gas during February at the higher rates to cover increased demand, they will be able to recover their costs in future months by building the increased costs into their future gas cost rate.